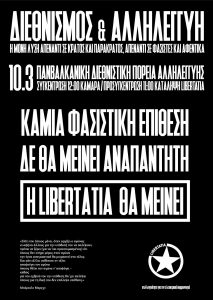 The only solution against state and parastate, against fascists and bosses

No fascist attack will stay unanswered

«Whoever stays home when the battle begins

and lets others fight for his cause

ought to watch out:

because whoever has not shared in the fight

He who wants to avoid fighting

will not once avoid the fight:

because he will fight for the cause of the enemy