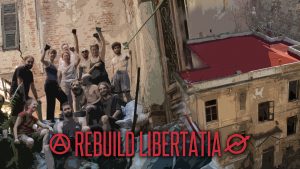 […]In order to continue the rebuild project, we are in need of additional funding other than the one we candispose ourselves, especially during this lockdown, since it’s impossible for us to organize any fundraising action as we used to do (concerts, financial support bars etc). Funding the rebuild-project is twofold: the cost of the reconstruction itself, as also a part of the costs that have come up for the legal defence of comrades being accused of the Libertatia struggle.

We kindly request your support in the completion of this project. Rebuilding Libertatia is a great challenge, not only for us, but for all the people in struggle against any form of fascism and capitalism. We believe that this process in itself and its ultimate success will be one more piece of proof that we can live and create without the interference of State, Capital and Authority. It is a battle that has to be won and will be won.

For financial support you can visit the following link:

STRUGGLE AGAINST FASCISM AND THE VERY SYSTEM THAT GENERATES IT

WE RISE BARRICADES FOR LIFE AND FREEDOM THROUGHOUT THE WORLD

SOLIDARITY
//to LIBERTATIA SQUAT
//to the 51 antifascists from Thessaloniki

For financial support you can visit the following link:

The purpose of the crowdfunding is the financial support of the struggle for the recontruction of Libertatia Squat and the support of the 51 arrested comrades on 16/9/2020 in Thessaloniki during an antifa patrol. 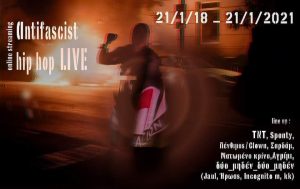 Video that we have made after the last invasion of the police on 23/8.

On Sunday 23/08 at 10:30 in the morning, several squads of cops raided the Libertatia squat in Thessaloniki. More precisely, during the reparation of the building’s roof that had been burned down by fascists, the cops broke the door’s padlock and raided the squat where they arrested 12 people that were inside. After that, for one more time, they stole several building tools and other necessary material for the reconstruction of the roof, as they had done one month before, when they raided the squat together with Ephorate of Modern Monuments-assistants and had taken a part of the squat’s equipment for the rebuild project. Right after the raid, comrades that were rallying outside the building, came in and re-occupied it. Other than the 12 arrested people, the cops held two more comrades that were standing outside the building and released them a couple of hours later. The arrested comrades spent the whole day both in Toumba’s Police Department and the General P.D. Of Thessaloniki where they have been released late at night, The accusations that have been charged to the comrades are : illegal working, damaging a monument of cultural significance and disobedience. It is also worth mentioning the disgusting tentative of the police and some media to connect the accidental arrest of a woman for drugs possession with the 12 arrested comrades.

This raid is the third in order in less than a year and aims to stop the rebuild project for Libertatia squat. All these attacks shows that the state continues targeting the structures of the movement, as also the timeless cooperation between the State and paramilitary-fascist groups against the libertarian movement. At the same time that the state’s mechanism supports those who burned Libertatia, it releases its stooges in order to arrest the comrades that chose from the very beginning to defend politically the squat and reconstruct the burnt building. As for the accusations for “damaging an historical monument”, against the people who undertook its conservation and its reparation (before and after the arson), they can only consist of a surrealistic and unsuccessful attempt of reversing reality about who’s the real destroyer.  Additionally, the role of the  Ephorate of Modern Monuments as a legal representative of the above accusations, with it’s sudden intrest can only be characterized as ridiculous. It is more than obvious who’s really interested in saving this building. For those who are still wondering, let us ask rhetorically where was the Ephorate when the so called “Stratou street jewel” completely abandoned and ruining over the years. Where were they when the fascist groups burned down the whole building. To conclude it is quite obvious what are the interests that the Ephorate serves, who are they covering and protecting and to who they are against. In the case of Libertatia things are quite simple and clear. All these facts -that Libertatia’s neighborhood was witnessing the last two and a half years- is now clear to every corner of Greece. Once again the neighbors showed to us their solidarity  in several ways, booing the police forces during the raid, informing us of the police presence and supporting us morally.

This particular attack against Libertatia squat cannot be disconnected from the previous repressive actions and evictions of squats, with the most fresh example being the eviction of Terra Incognita squat.

During a tense social condition, where the lives of people are more and more devaluated and impoverished and the management of the Covid-19 pandemic puts in danger thousands of people, the State decides to strike and intensify the repression in order to weaken the revolutionary movement. Fearing the social upheaval and the generalized indignation of people, the State tries to destroy every resistance, targeting once again the anarchist movement and its structures as places of resistance against the State and Capialism. It is in this condition that the revolutionary movement shall respond actively, defending its structures, its political presence and its history of social struggle. The rebuild project of Libertatia is an objective for all the squat movement. The victory in this struggle will be our answer against State and fascist attacks to our structures.

The reconstruction of Libertatia squat is not only an affair concerning itself. On the contrary it concerns the whole antifascist, anarchist and revolutionary movement. It is about the all-encompassing defense of the squats, as the whole rebuild project sends a very powerful message against State’s repression and fascist violence and establishes a strong symbolism during a generalized repressive condition. Our political presence in the squat has been already assured a couple of weeks after the arson attack. Libertatia squat will survive and will continue to exist as already does, by organizing plenty of demonstrations, political discussions, movie projections etc. The whole point is the completion of the rebuild project by revolutionary means, in order to highlight both the political responsibility of State’s repression and the political defense of the revolutionary occupied spaces.  The State will exploit every retreating-step we are making. That is why, we have to stand up, resist, defend our structures and our struggles, organize ourselves better and broaden the ongoing class war.Libertatia  26/08/20 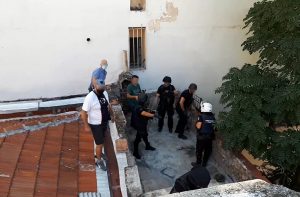 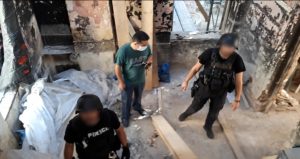 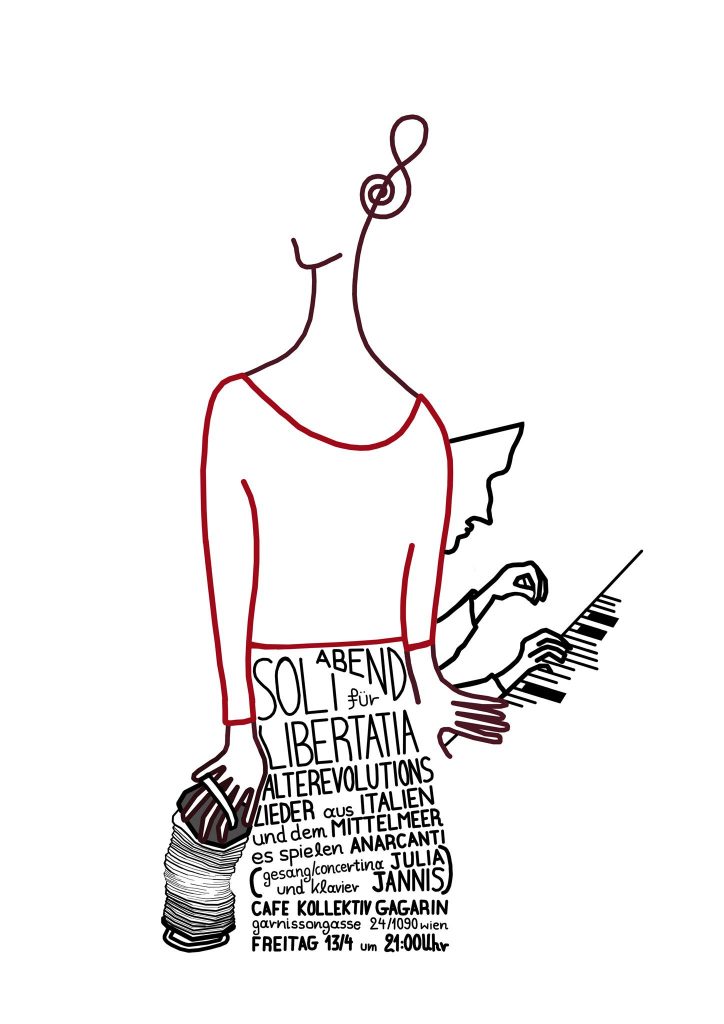 On 10/3 a big pan-balcanic solidarity demonstration happened in Thessaloniki. About 5000 people from all the Balcans participated to stand up against fascism and express their solidarity with the squat and people of Libertatia. 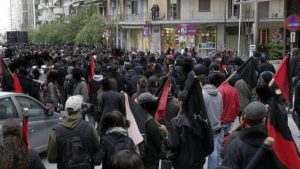 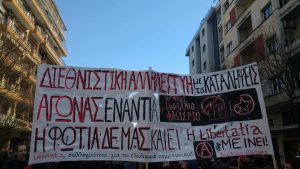 “International solidarity with squats / Fight against state, capital and fascism / Fire does not burn us, Libertatia will stay” – Libertatia, collective for libertarian comunism, solidarity assembly 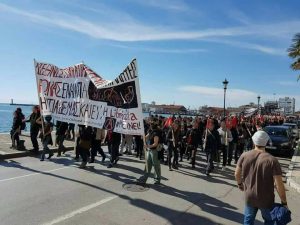 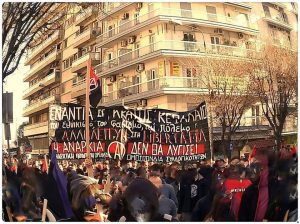 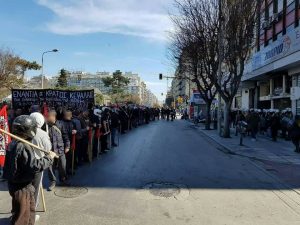 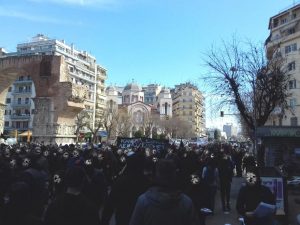 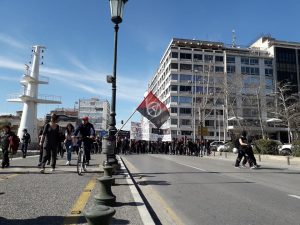 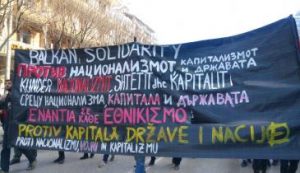 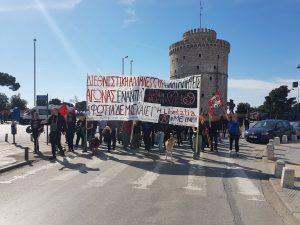